Despite their size, tarantulas are much less dangerous than is commonly believed. Their bite is deadly for mice and insects, but for humans it is usually no worse than a wasp sting. Nevertheless, as a tarantula owner, you often encounter misunderstood facial expressions. Spider phobia (arachnophobia) is one of the most common animal phobias. After all, 35% of Europeans suffer from the pathological fear of spiders. But why this fear of tarantulas is unfounded and why keeping tarantulas is a fascinating hobby, you will learn in this article.

How dangerous are tarantulas actually?

Hollywood contributes the main blame for the bad reputation of tarantulas. They are portrayed in movies as venomous and dangerous to humans. Yet tarantulas are merely large, photogenic, and many of them are easy to handle on the film set, which is why they have been used very frequently in horror and action-adventure films. When a “venomous” creature is needed, the special effects team calls in the film animal trainers with their tarantulas! This is then used to threaten James Bond or Indiana Jones, or to bring disaster on an entire small town. The spiders presented in such films are often among the tamest and least aggressive of their kind.

In reality, the venom of these largest of all spiders is generally only very weakly poisonous to humans. Their mild venom is weaker than that of a typical bee. The only danger from keeping common tarantulas comes from the irritating hairs on their abdomen (stinging hairs), which can cause skin rashes or inflammation of the eyes and nasal passages. To avoid such problems, simply keep tarantulas away from your face and wash your hands after handling a tarantula. By the way, the stinging hairs on tarantulas only occur on New World (America) tarantula species. They are purely a defense mechanism against predators.

Where do tarantulas live?

There are hundreds of species of tarantulas found in most tropical, subtropical but also arid regions of the world. Their color and behavior vary depending on their specific environment. The majority of tarantulas are cave dwellers, usually making themselves comfortable under rocks or roots. When most people hear the word tarantula, they think of plate-sized spiders from exotic countries. However, there are also three species of tarantulas in Germany. However, these live in their living tubes under the ground usually so hidden that few people get to see them. Also, the size of the so-called wallpaper spiders with about 1.5 to 2.0 cm is anything but frightening. By the way, the position of the chelicerae (biting tools) and not their size is decisive for the classification as tarantula.

How do tarantulas grow?

Tarantulas shed their external skeleton at regular intervals, which is called molting. In the process, they also replace internal organs such as the female reproductive organs and stomach lining, and even regrow lost limbs.

Many keepers think that if their tarantula is on its back, it means it is dying.  Most tarantulas molt lying on their back (a few molt on their side). The molt usually takes anywhere from a few minutes to a full day.

Once the old exoskeleton has been shed, the tarantula’s body is soft and extremely vulnerable. Although the actual molting process usually takes only a few hours, the tarantula’s body remains in the fragile state for several days before the new exoskeleton is fully hardened. During this phase, the tarantula lives very reservedly and remains in its shelter. Even feeding insects such as crickets or grasshoppers can become dangerous during this time and should be removed from the terrarium before each molt.

Why are tarantulas so popular as pets?

As scary as tarantulas may be to many, the animals have nevertheless become a popular pet around the world. And there are reasons for that! Most people choose either a cat or a dog as a pet. Some also want to get a bird like a parrot or cockatiel, or an aquarium to keep fish as pets. However, some go beyond the norm and seek out exotic animals as pets. In doing so, they want to recreate a piece of nature in their terrarium and showcase it in their living room. And all those who display a terrarium at home know that no visitor can resist the temptation and looks fascinated into the terrarium.

Often in the terrariums are kept reptiles, chameleons, amphibians or snakes. The more exclusive, the better. However, this also means that such a rarity often requires a lot of care. If this time is not constantly available because of work, family or vacation, a compromise solution is often sought. In this case, one inevitably comes across tarantulas. They are very easy to care for and inexpensive, can live for a long time, take up little space and are incredibly interesting – which makes them the perfect exotic pets!

In our store we always have a few tarantulas for beginners and a few rarities. Feel free to drop by! 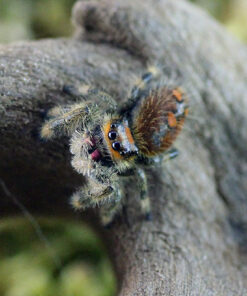 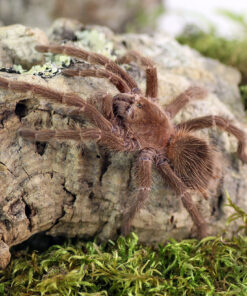 What argument do you have ready in case of inaccurate prejudices?