What name do I give my mantid? Julia or Julian? First of all you should know the sex of the animal.

I think it is not only interesting for the naming to know which sex your mantis has. All who plan to breed with their mantids should know if they have the necessary ingredients.

The reproduction of mantids takes place sexually. There are only very few exceptions, which can reproduce by parthenogenesis (virgin production). However, as we know from some phasmid species, only female larvae hatch from them. Therefore, almost all mantid species exhibit sexual dimorphism (sex-specific distinctions).

Of course, one could simply wait until sexual maturity and then see what comes out. However, in many mantid species the males become sexually mature 2-3 molts before the females. It is not only the different maturing time until the adult molt, but the females need additionally longer until they are ready to mate. Thus it is advantageous to recognize the sex differences early to keep the male mantids at the lower temperature limit and the female mantids at the upper limit to compensate this temporal shift. However, please be careful not to interbreed males and females of the same parent too often to avoid the risk of genetic defects.

Even in adult praying mantises, one must first know and recognize the sex differences. Since male mantids become adults faster and also need less molting we have a first clue, the size. Female mantids usually grow larger and stronger. The overall appearance of the male representatives is rather small and thin in comparison. 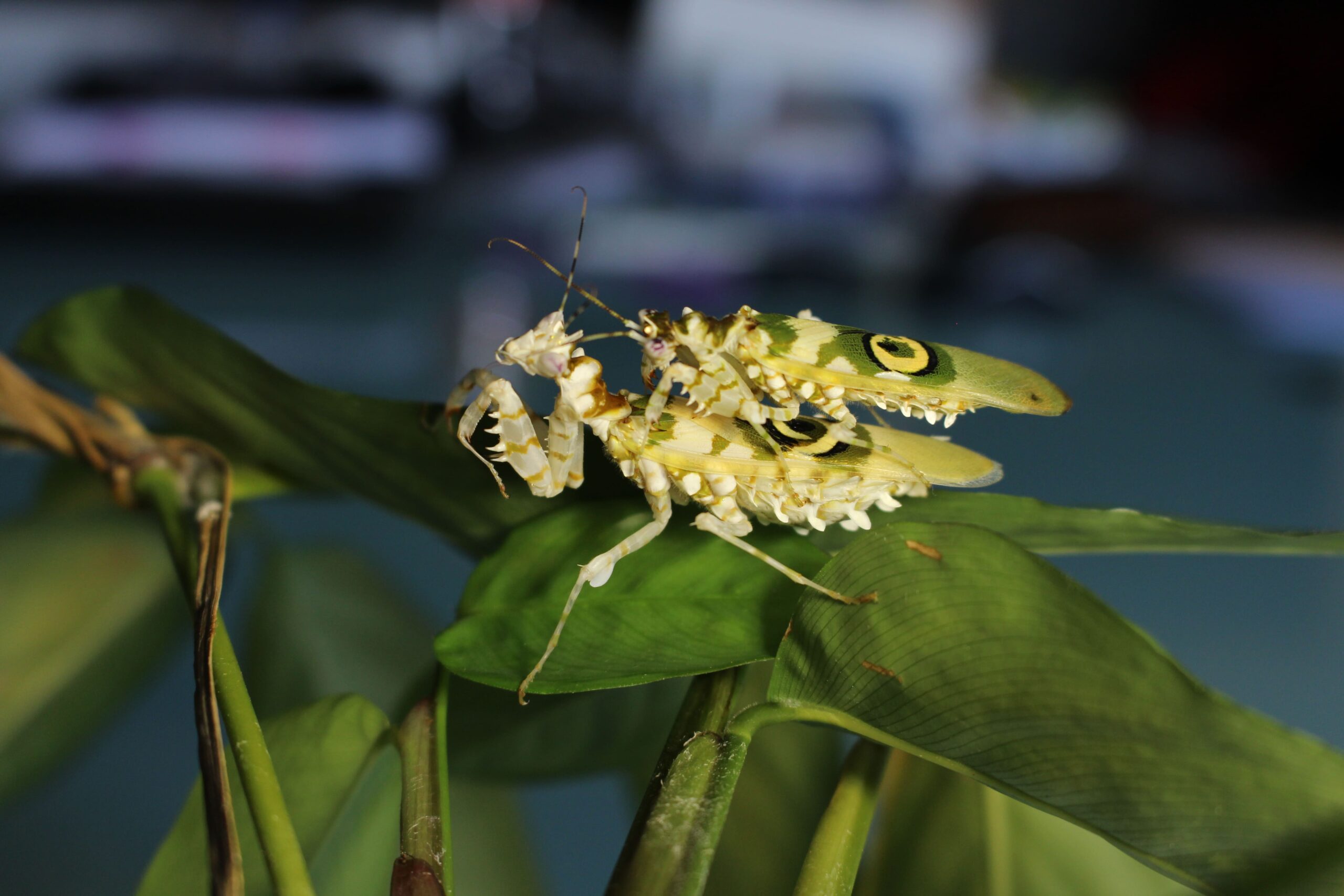 The visible number of segments on the abdomen is 8 in males and only 6 in females.

The wings of the males extend far beyond the abdomen and due to the wing size and also the body shape most of them are good and agile flyers. In females the wings usually end at the tip of the abdomen. If they try to fly at all it is more like a dive than a locomotion.

The antennae of male mantids are longer and sometimes thickened. There are sensory cells in the antennae or antennae. This allows males to better pick up mechanical stimuli (feel) and chemical stimuli (smell). As soon as a male picks up the pheromones through his antennae and is also sexually mature himself, he will follow the scent trail. In this way, the wandering males find the females, which are usually relatively sedentary, even over long distances.

Logically one could assume, if the males become adult faster then they also grow faster and this could be an indication. However, the moulting distances are approximately the same with the same parameters. But the males moult 2-3 times less than the females and do not gain so much size during the moults from L3-L4 on.

In all mantid species, males can be distinguished from females by the number of visible sternites (abdominal segments). A trained eye can distinguish with or without a magnifying glass from L3 on by the segments. The safest is always the subgenital plate. The subgenital plate translates to the plate below the genitalia. One large segment at the tip is always a female, two smaller segments at the tip a male. At first, one finds this difficult and cannot tell the difference. It often helps to take a picture of the underside of the abdomen and zoom in on the plate. After the first experiences you slowly but surely get an eye for it and quite fast you don’t need magnification anymore.

With the orchid mantis one has several additional possibilities to recognize the sex. First, you can tell the sex by the color of the nuchal band. A brown neckband indicates a male and a green neckband indicates a female. The coloration of the males can be slightly greenish, but never as green as the females. However, this is also not visible in the earlier larval stages, at least only poorly. And when it is so far, you can distinguish just as well by other characteristics like abdomen, body size and lobes.

The female H. coronatus have large, leaf-shaped lobes which can be used as a further indication for sex determination.

The abdomen of the male orchid mantis is oval and has 6 segments and the female abdomen has a round shape and 5 sternites.

Males have thickened antennae in subadult and adult stages. 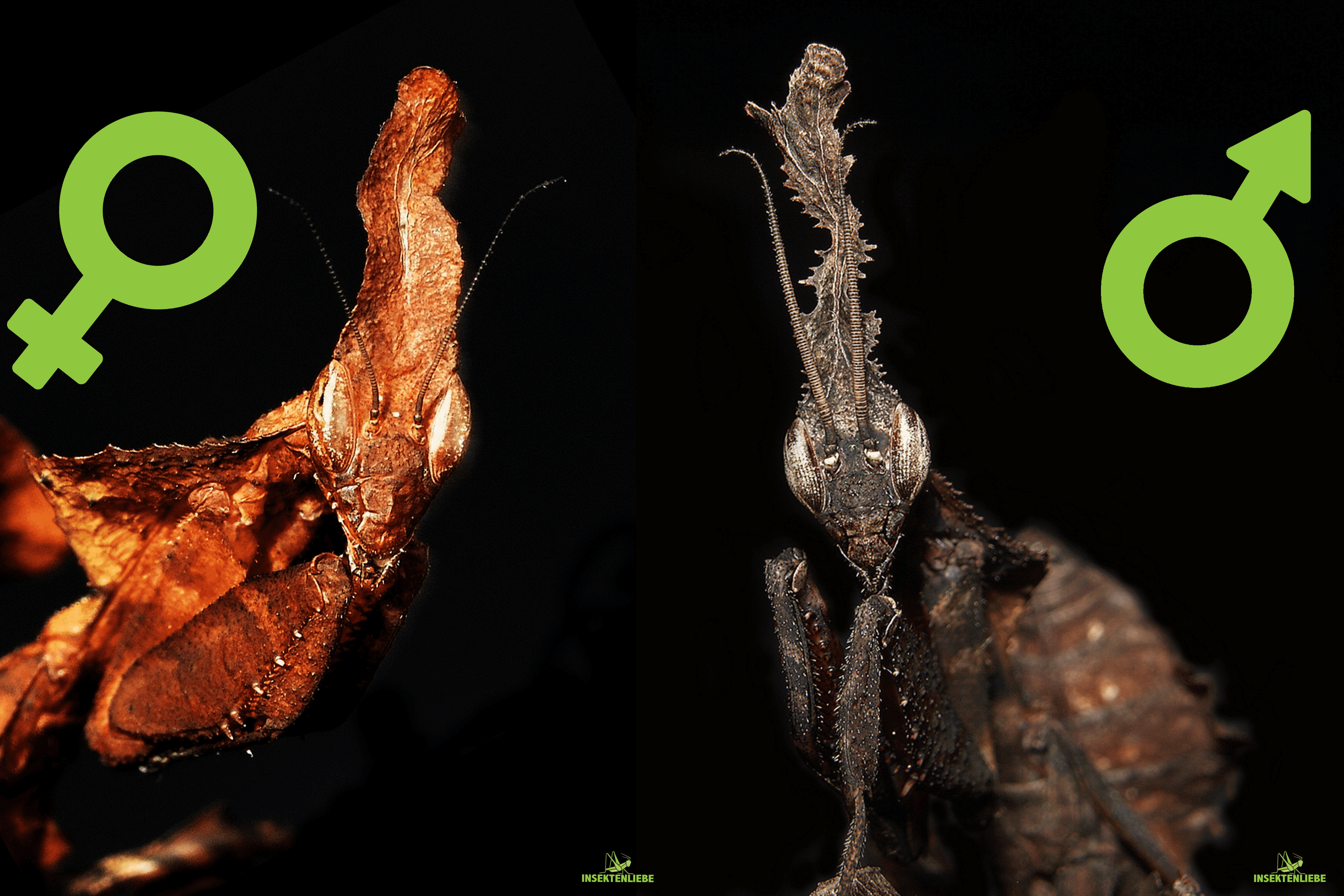 Starting at L3, male mantids have an additional spine on the abdomen.

AFTER WATCHING YOU CAN DO IT YOURSELF!