Skip to content
If you are interested in breeding jumping spiders, the question soon arises as to how to properly approach jumping spider mating. As is widely known, the male jumping spider enters unsafe territory as soon as it sits opposite the female. If the female is not nourished enough, her lover could end up as dessert. Before the actual jumping spider mating can take place, however, several points must be clarified. What these are exactly follows now!

First of all, for breeding jumping spiders you need one female and one male specimen of the jumping spider species you want to breed. The article on sexing jumping spiders can help you to find out if you have a male and a female at home. Crossbreeding with different species of jumping spiders such as Hyllus diardi, Phidippus audax or Phidippus comatus is often genetically impossible. On the one hand, they are not compatible with each other and a mating attempt in this direction should be refrained from. These mating attempts usually end with one animal being eaten and if not, the resulting offspring are often not mateable. Mating of different Phidippus regius local forms such as Phidippus regius “Apalachicola” and Phidippus regius “Everglades” should also be avoided, even if theoretically possible.
The mixing of different species and local forms is called hybridisation. Hybrids are not well regarded in the terrarium hobby and sell poorly. Furthermore, hybridisation cannot be reversed and ultimately ensures that the diversity of species, colour varieties and local forms, which are only available to a limited extent in the terrarium hobby anyway, are lost. For this reason you should stick to mating a species or local form only among themselves.

How can I tell that my jumping spiders are ready to mate?

Before mating, it is very important to determine if your jumping spiders are ready to mate. Your jumping spider is ready to mate as soon as it is adult, i.e. as soon as it has completed its last moult and all sexual characteristics are fully developed. If the bulbs, i.e. the thickenings at the tip of the pedipalps, are clear and defined comma-shaped, your male is adult and thus ready to mate.
A good example picture can be found below. If the thickenings are still more rice-shaped or oval, your male probably needs one or two more moults. You can recognise the sexual maturity of your female by the fact that her epigyne, the sexual opening between the booklung on the “abdomen” of your spider, is clearly defined as a black, shiny spot. You can also find a good example picture below. In some forums exact information is given about the number of feeding skins in which the jumping spiders are supposed to be sexually mature. This information should not be believed, as the number of moults until sexual maturity within a species is also defined by external influences such as heat and can therefore even differ depending on the individual. 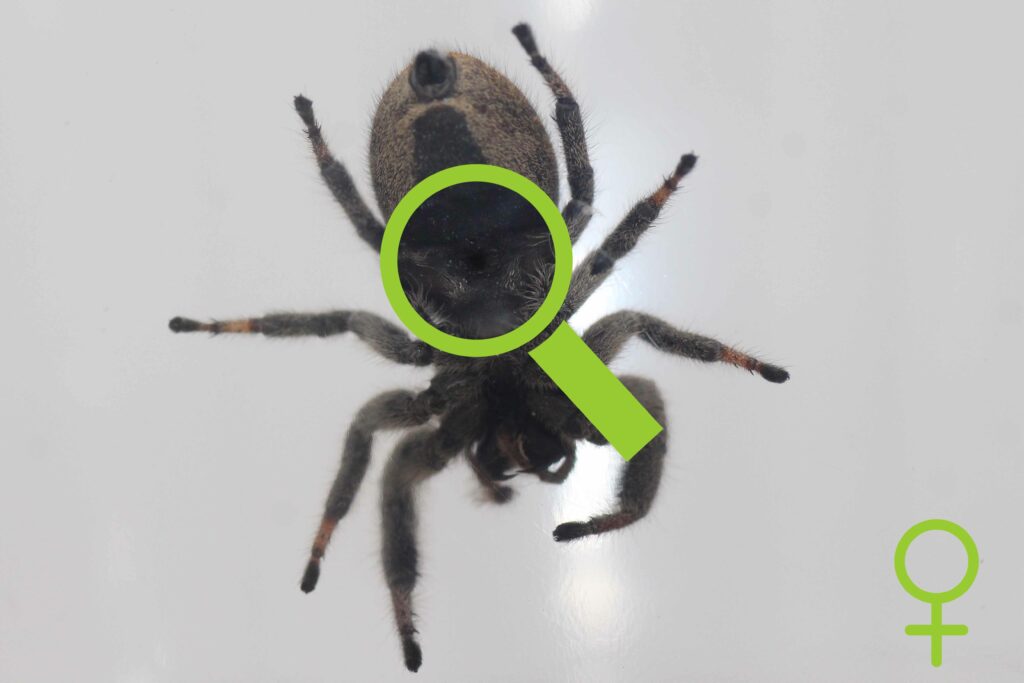 Once your jumping spiders have had their last moult and are adults, you should give them about 1.5-2 weeks before you mate them. This will allow the animals to fully harden. It also gives the male enough time to build a sperm net and charge his bulbs. You should also feed your female regularly and more often than usual during this time. This increases the chance that she will not perceive the male as food.

The day of the jumping spider mating

If your male and female have now been adults for some time and are well fed, nothing stands in the way of the actual jumping spider mating. I recommend that you feed the female well on the day of the mating and put the male with her if she still has food between her fangs.
Most of the time she just keeps eating as long as the male is doing his job. I also recommend putting the male in the female’s terrarium. This way the male can usually quickly sense the female’s pheromones there and find her faster. The mating act takes place in such a way that the male performs a kind of mating dance in front of the female for some time with raised front legs and then climbs onto her back.

In doing so, it turns its opisthosoma, i.e. its rear end, and pumps its sperm into the female’s epigyne with the bulbs. If you look closely, the pumping can also be observed very well.

This mating act can take different lengths of time, e.g. 5-45min or even longer. However, success does not depend on the duration of the mating. If the female is well fed, in 8 out of 10 cases the mating is mostly peaceful and the two go their separate ways without incident. As soon as a successful mating has been observed and the two animals have separated on their own, the male can be recaptured from the female’s terrarium.
A re-mating after some time is usually not necessary. After mating, it usually takes 2-4 weeks until the female lays her eggs. Then another 4-6 weeks until the babies hatch and leave the nest. In addition, it is likely that your female will not only build a cocoon. After mating once, females can lay fertilised eggs one to five times.

The mating of jumping spiders is an exciting and also delicate moment for us observers and for the jumping spiders themselves. However, if you follow the suggested tips, a successful outcome is almost guaranteed.
You can find our offspring for sale here: 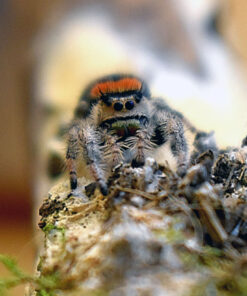 If there are any further questions, feel free to ask them below the article in the comments.