Updates to our newest breeding forms

Meanwhile, woodlise are offered in various breeding-colors and -patterns, so-called color-morphs. The selection of beautifully coloured, special or rare specimens is constantly increasing.

Also in our breeding stock there are always such mutations, about which I will report on this page regularly. It is important for me to inform you from the discovery of a new color morph to breeding and selection.

Part of our daily work is dedicated to our isopod color morphs. We distinguish between the naturally occurring mutations and the so-called designer morphs.

While e.g. albinos, orange, caramel, Dalmatian or High Yellow have been discovered sometime in the wild or in local breeding and are “pure-bred” at same time, designer morphs are combinations of two or more natural mutations.

Read how we found this species

What does heterozygous actually mean? 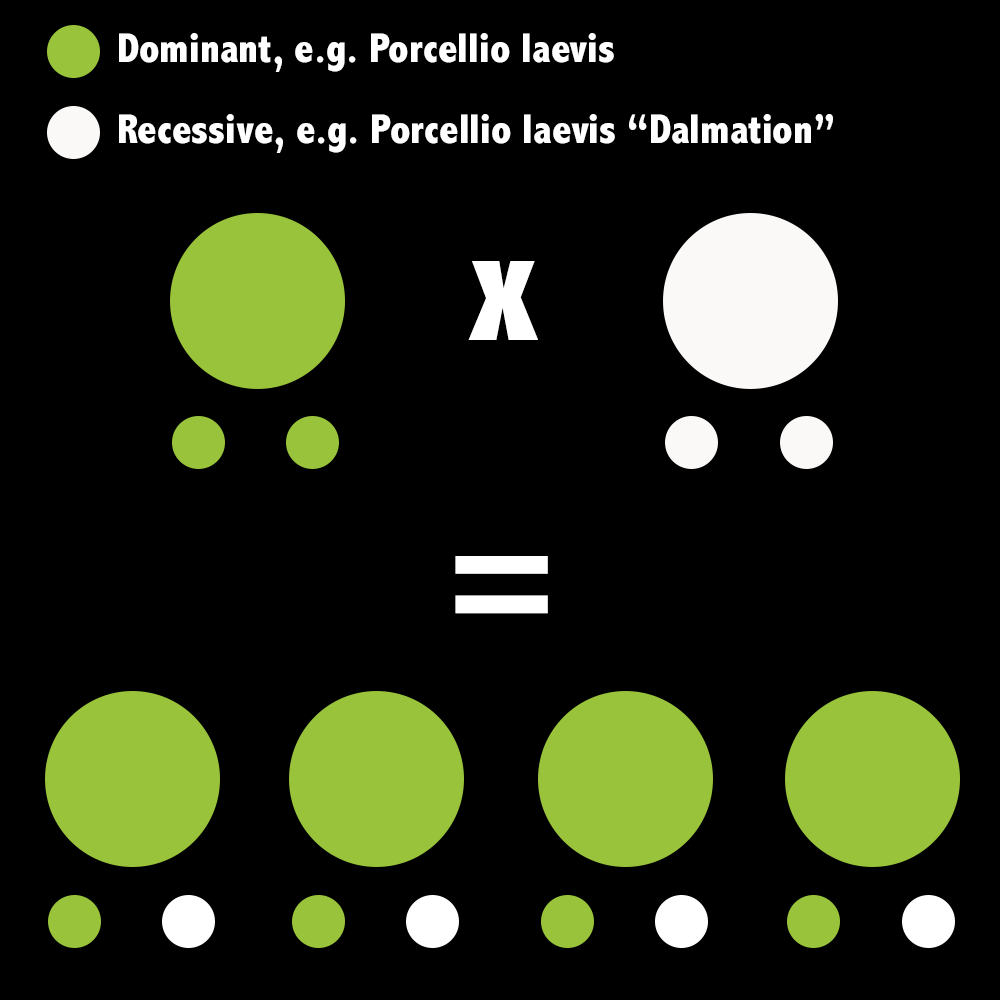 Heterozygous is the situation when a “mutated” gene on one chromosome is accompanied by a healthy gene on the other chromosome. Often the expression of the mutation is suppressed and completely compensated by the “healthy” gene (=recessive inheritance).

Read how a new color mutation has occurred

What happens when we’re heterozygous mating offspring together? 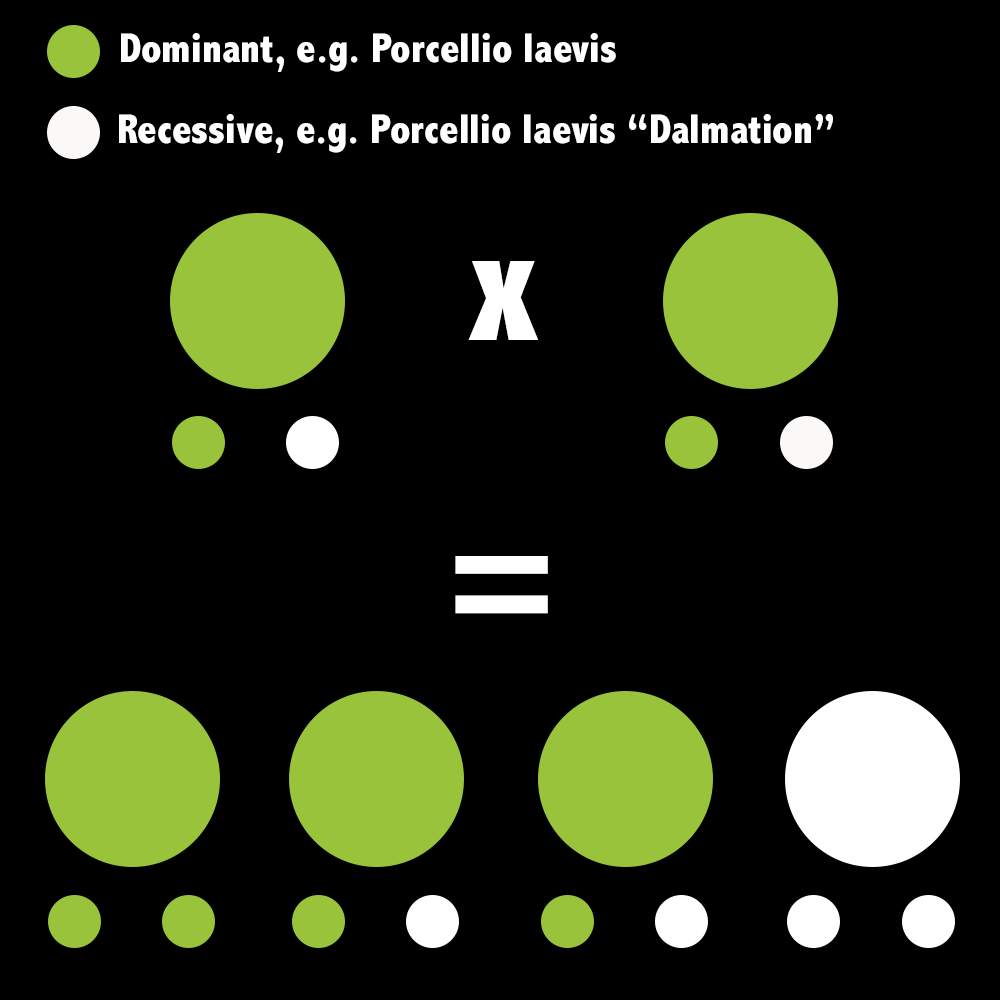 The second example shows the mating of this so-called F1 generation. So the offspring from our first example. It is normal to mate the siblings to each other in order to perform a color selection.

Conspicuous features such as malformations or small growth should be removed from the breeding line. In our example we mate 2 Porcellio laevis “het.(heterozygous) Dalmation”.

The neW Newsletter is coming soon…

Read why these color morphs are so special

What does the (T) in albinos mean and what is the difference between (T-) and (T+)?

The T stands for tyrosinase, which plays a major role in animals and humans in the production of melanin, among other things. Melanins are colour pigments that give our hair, skin or eyes their colour. The same is true for isopods. Melanins are responsible for how our woodlice are coloured. The essential common feature of all isopods “diagnosed” with albinism is the lack of melanin pigments. 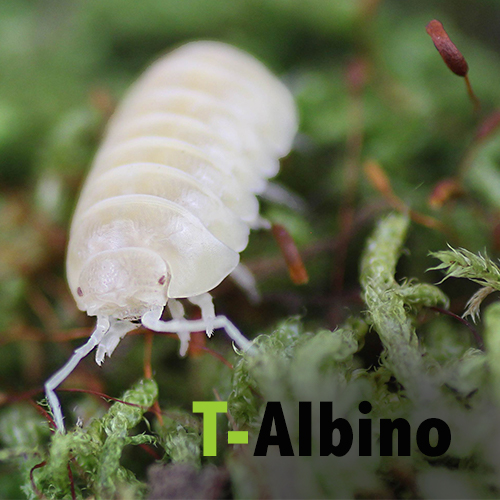 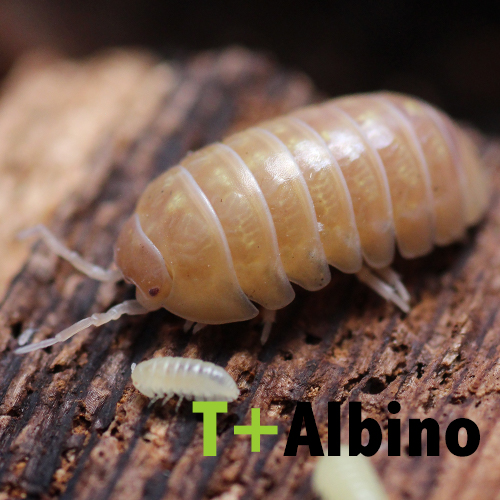 In a T- Albino the tyrosinase is either completely defective or not present at all. Therefore the animals have no more melanin pigments and appear white with red eyes. The eyes are not red, but one can see the red blood vessels due to the missing pigmentation.

The T+ albino has a functioning tyrosinase and therefore melanin pigments are also present. However, due to missing proteins, the T+ albino can only carry out the first two to three steps of the melanin process and therefore cannot produce dark color pigments. Therefore T+ albinos usually stand out due to their caramel-coloured appearance.

The secret of the isopods without eyes

The secret of the isopods without eyes- part 2

From the Plane Jane to the Designer Morphe