Maybe you’re like me: when I think of the color pink, I have girls’ rubber boots or chick nail polish in front of my eyes. But when I look at my orchid mantis, it can’t be pink enough. Even visitors who claim they are disgusted by insects lose their shyness at the sight of the crowned mantis. Hymenopus coronatus also inspire people outside our little “insect keeper world”. But are they suitable for everyone?

Behaviorally they are pronounced lurking hunters, which is typical for many mantid species, this also brings their appearance. It likes very much to hang upside down on branches and plants and imitates almost perfectly an orchid flower.

And if you look like an orchid flower yourself, you don’t need one to camouflage yourself. Therefore, they are less likely to be encountered on flowers, but more often free on branches and plants, regardless of whether there are flowers there or not.

Their victims make the fatal mistake of thinking they can find nectar there and head for the “flower”. Before they can correct the misconception, they find themselves in the clutches of the responsive orchid mantis.

The pink coloration of the orchid mantis, by the way, can neither be strengthened nor influenced at all, but it arises from chance according to my experience. Animals that I kept with pink plastic flowers turned pink just as often as those that grew up without flowers. Genetics also has no effect on the coloration of nymphs.

At night, crowned nymphs turn into vampires. They look at you through burgundy eyes, which I think makes their overall look even more interesting.

By their nature they are extremely voracious and grab everything greedily that moves near them. Due to their high aggressiveness it is recommended to keep female Hymenopus coronatus individually.

I have set the keeping level of the orchid mantis to difficult not because of a particularly demanding husbandry, but because the breeding succeeds only a few and I evaluate the overall picture breeding, rearing and keeping.

Therefore the crowned mantis is quite suitable for relatively inexperienced keepers, but one should rather not get used to the idea of being able to breed these animals successfully over several generations.

Its biotope stretches across the rainforests of India, Malaysia, Thailand, Java, Indonesia, Brunai and Borneo. This is a huge area along the equator that Hymenopus coronatus claims for itself. On both sides of the equator is the climatic zone of the tropics. Due to the high position of the sun during the whole year at the equator, the irradiation is high and almost constant. The consequences are an almost constant cloud formation and a correspondingly constant precipitation level.

Keeping in a Insectarium:

It is best to incubate the ootheca in a BraPlast box. Then you save the trouble of moving the animals. In the lid I cut out an opening and used organza with hot glue as a ventilation grid. On the side I added a ventilation for safety. At the beginning I take untreated wood wool as climbing possibilities and as ground kitchen towels. There must always be twice the size of the mantids at the bottom, so that the moulting can proceed smoothly. You should keep the nymphs a little bit more humid than the bigger animals. I spray the substrate in the morning and evening. When spraying it is better to start a little more carefully and approach slowly. Waterlogging is more dangerous for your animal than a slightly lower humidity. There should always be enough Drosophilas as food supply in the container. I change the kitchen towel at least once a week, depending on the density of the population.

Due to their realtively pronounced intra-species aggressiveness, I put them from L4 individually and can recommend everyone to do the same. I continue to spray in the morning and evening carefully in the insectarium and always spray the orchid mantis. Therefore one can observe again and again, how she drinks the water from her tentacles.

You are also welcome to watch the video to the article. 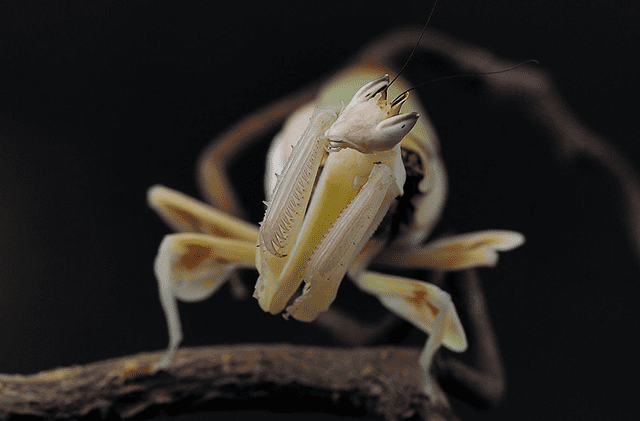 Get a Orchid Mantis

✓ Comes from our own breeding

The sex determination can be done reliably from L4.

With the orchid mantis one has several additional possibilities to recognize the sex. First of all, the color of the neck band can be used to identify the sex. A brown neck band indicates a male and a green neck band indicates a female. The coloration of the males can be slightly greenish, but never as green as the females. However, this is also not visible in the earlier larval stages, at least only poorly. And when it is so far, one can distinguish just as well according to other characteristics like abdomen, body size and lobes.

The female H. coronatus have large, leaf-shaped lobes which can be used as another indication for sex determination. The abdomen of the male orchid mantis is oval and has 6 segments and the female abdomen has a rounded shape and

If you are unsure, you can send me photos by e-mail and I will determine the sex for you.

Females need 2-3 weeks after the mature molt until they are ready to mate, males only 1 week.

Since males become adults 3 molts before females, the likelihood of being able to mate animals from a hatch is very low. Even with different keeping conditions, where you keep the male at 23°C and the female at 30°C, you will only manage to get both sexes adult and mate at the same time with a lot of luck.

It makes much more sense to raise 5 Hymenopus coronatus up to L5 and then buy another 5 animals in L2. If you are already breeding yourself, you can simply take care of this difference with the oothecae you have already bred.

The difficulty of breeding over several generations described at the beginning takes effect exactly at this point. To get adults of both sexes permanently at the same time needs some experience and tact.

Before mating, the female should be fed so abundantly until she no longer accepts food. The tiny males wait for the right moment and fly unerringly to the back of the female. When they have climbed it, they start drumming on the female’s wings. The sexual act itself can last up to 10 hours and can therefore rarely be observed completely.

One ootheca can contain up to 130 eggs, although the average is 40-60 eggs. In contrast to the free ootheca of cockroaches, praying mantises adhere their roundish, elongated, shield-like, teardrop-shaped or parcel-like ootheca to various substrates. They are often attached to climbing surfaces or to the gauze lid. To do this, they first apply a proteinaceous secretion to the substrate. Under spiral movements of the abdomen, more of this foamy secretion is now released, whereby the eggs are now deposited one after the other into the same in such a way that they are in a certain arrangement to each other and occupy one compartment of the ootheca each. Finally, the secretion is drawn out in a more or less long thread before it hardens into a sponge-like, very firm cocoon. Along the surface lies the thinnest-walled area from which the nymphs hatch. It can usually be seen as a large-pored, seam- or comb-like strip. More about the ootheca can be found here.

Uniform high humidity should also prevail during incubation. At least 75% humidity is advisable. I also add springtails to the incubation boxes to prevent mold from forming on the substrate. I use clay granules as substrate. I keep the temperature at 25-30°C, as with nymphs and adults. With these parameters the Hymenopus coronatus nymphs hatch after about 4-6 weeks.

As L1 they have an orange/red coloration, where the extremities and the head are deep black. Whether this is ant mimicry I cannot say. In contrast to the Australian ghost ants, where I could show the mimicked ant, I don’t know of any ant species with this appearance in this region. Maybe someone who knows more about ants than I do can help me.